Archiving, compressing, and extracting files are some of the most common tasks for a Linux administrator. If you've ever worked with "tarball" files that have the .tar, .tar.gz, .xz, or .bz2 extension, there's a good chance it was created using the .tar utility.

In this article, we'll demonstrate how you can use the tar utility to archive, compress, and extract files on Linux systems. We'll use Ubuntu 20.04 for all examples, but you can follow along on any Linux system that uses tar.

tar — short for "tape archive" — is a GNU command line tool for creating and extracting archives.

An archive is a single file that includes multiple files or directories. In opensource and Linux communities, tarballs are one of the most common methods for distributing source code and other important files.

In addition to creating archives, tar can perform compression and decompression using several different compression utilities such as gzip and bzip2.

When dealing with Linux archives, you're likely to hear about tar and gzip, often in similar contexts.

The basic difference between the two tools is:
tar creates archives from multiple files while gzip compresses files.

However, these tools are not mutually exclusive. tar can use gzip to compress the files it archives. tar's z switch makes the tar command use gzip.

#gzip vs. bzip2 vs. xz Compression

gzip isn't the only compression program tar can use. It also supports bzip2 and xz. The table below details some of the basic differences between these compression tools.

Generally, gzip and bzip2 are comparable from a compression and performance perspective, but gzip is more widely used. .xz tends to give the best overall compression but also takes more time and compute resources.

#How to Compress a Single File or Directory

The general command to compress a single file or directory in Linux is:

Here is what each of those switches means:

For example, to compress the /pepper directory to an archive named egg.tar.gz, run this command:

The output will look similar to:

If we omitted the v switch and instead used the command tar -czf egg.tar.gz /pepper, the output would not include each file. Instead, it would look similar to this

And if there were no errors or characters that needed to be removed from the member names — for example, if we were compressing files in our current working directory — there would be no output.

Note: There's more than one way to specify tar switches. You'll notice that we're using - before specifying our tar switches. While that is a common convention, it is not generally required. tar czvf <archive name> </path/to/file/or/directory> would work too. As would tar -cf <archive name> -vz </path/to/file/or/directory>. We'll stick to the convention we used here in the rest of our examples, but keep in mind there is more than one way to specify tar options.

#How to Compress Multiple Files or Directories to a Single Archive

The general command to compress a single file or directory in Linux is:

#How to Exclude Directories and Files when Archiving

The general command to exclude files from a tar archive is:

For example, suppose we had these files in our /pepper directory:

And we want to compress everything except the .log files to an egg.tar.gz archive. We can use this command:

If needed, you can specify multiple --exclude patterns in a single command.

#How to Add Files to an Existing Archive

If you have an existing archive and you want to add files to it, you can use the -r or --append options. A general command to append to .tar archives is:

However, -r and --append are incompatible with compressed archives. That means you can only use them with tarballs you have not run through compression programs like gzip, bzip2, or xz.
If you attempt to use -r or --append on a compressed archive, you may see an error similar to:

Because of this limitation and some of the other nuances of -r and --append, in many cases it's easier to create a new archive with the additional files.

The -t and --list options work on compressed and uncompressed archives.

For example, to list the contents of an egg.tar.xz archive in your current working directory, run this command:

#How to Extract an Archive

tar's -x switch is for extracting archives. The general command to extract an archive in Linux is:

The tar -xf command works with both compressed and uncompressed archives.

For example, to extract a egg.tar.gz archive in our current working directory, we can use this command:

#How to Extract an Archive to a Specific Directory

In some cases, you may want to extract files to a directory other than your current working directory. tar's -C switch is useful in this case.
The general command to extract an archive to a specific directory is:

For example, to extract our egg.tar.gz archive to /tmp/cherry, we can use this command: 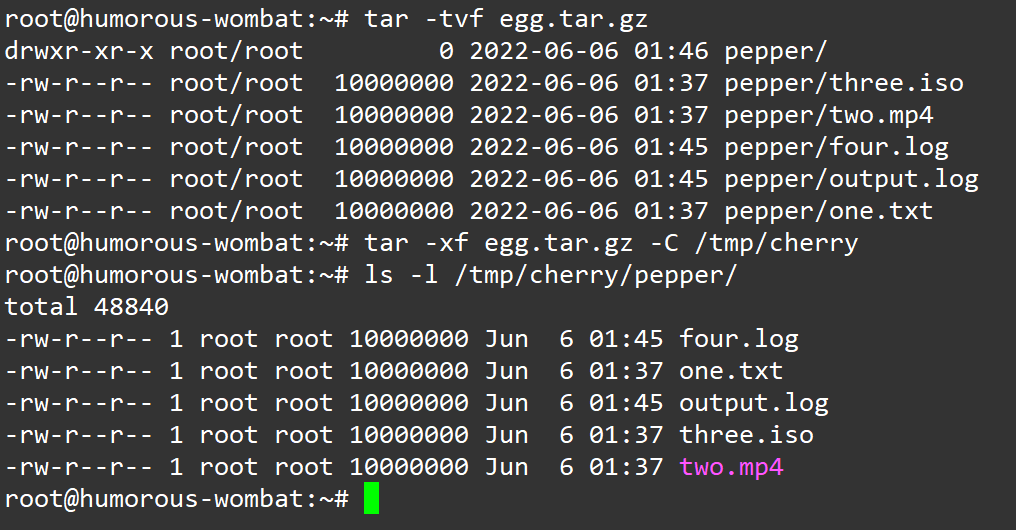 Now that you know the basics of working with tar, you can work with "tarballs" like a pro. Keep in mind, tar is flexible, and you can combine different switches to produce different results and tweak output. To take a deeper dive on tar, check out the offical GNU tar manual