#A Complete Guide to Bash History

Developers, sysadmins, and DevOps engineers spend a lot of time at the Linux command line. And, invariably, we make typos. Other times, we just need to run the same command again or determine what commands were previously executed on a system. In all of those cases, knowing how to work with bash history helps.

In this article, we'll take a closer look at what bash history is, how bit works, and how you can use it to become a more efficient when you're working at the Linux command line. You can follow along with the commands in this article using almost any modern *nix operating system with bash.

#What is bash history?

The term bash history refers to the commands, files, and shortcuts that allow you to view, modify, and delete bash commands that have been run on a system.

Bash has two bulitin commands for working with bash history:

In addition to these two bulitin commands, there are a variety of files (like ~/.bash_history), expansions (like !!), and keyboard shortcuts (like the ↑ and ↓ keys) that help you work with bash history.

In the sections below, we'll explore how these aspects of bash history work.

#How does bash history work?

You can modify the default behavior of the history command by setting environment variables, which we'll review in more detail shortly.

#Working with Bash history: The basics

The easiest way to get started working with bash is to run the history command with no options. You should see output similar to this:

The numbers next to the commands indicate the order they were entered into the history (the oldest command being 1). You can also use the ↑ and ↓ keys on your keyboard to scroll through your bash history.

We can limit the output to the last N commands with the command history N. For example, history 2 will return the 2 most recent commands.

You can pipe history into grep or less to make it easier to filter the output.

You can delete a specific entry with the history -d N where N is the number of the command or a range of numbers. For example, history -d 2-4 deletes commands 2, 3, and 4 from our history.

To clear the history buffer (i.e., the commands saved in RAM for the current terminal session) use the command history -c.

The bash history saved to disk is in the $HISTFILE which is ~/.bash_historyby default. You can clear that file with a command such as:

In some cases, you may want to modify how bash history works on your Linux system. Adding Linux environment variables to your ~/.bashrc file can help you do just that. Here are some common use cases for customizing bash history using ~/.bashrc.

As we go, remember that changes to a user's ~/.bashrc file take into effect after logging out and logging back into your shell. Alternativelly, you may run . ~/.bashrc or source ~/.bashrc to reload bash settings.

You may want to exclude commands from bash history to avoid noise in the output or for security reasons. On many Linux distros, you can prevent a command from being included in bash history by adding a space before you execute the command.

However, that may not hold true on all distros. Whether or not leading spaces are ignored depends on the$HISTCONTROL environment variable. If $HISTCONTROL is set to ignoreboth or ignorespace, commands with a leading space are not saved to history.

To exclude commands from your bash history with ~/.bashrc, you can use the $HISTIGNORE environment variable. $HISTIGNORE allows you to define a colon separated list of command patterns that will not be saved to your bash history. For example, to ignore any sudo commands or any commands where echo is followed by a w, add this to your ~/.bashrc

It's common for users to have multiple terminals open for the same user account, and this is where things can get tricky. By default, the historycommand will only show commands from the current terminal session and the commands that are saved to the ~/.bash_history file are the commands from the last session to log out. 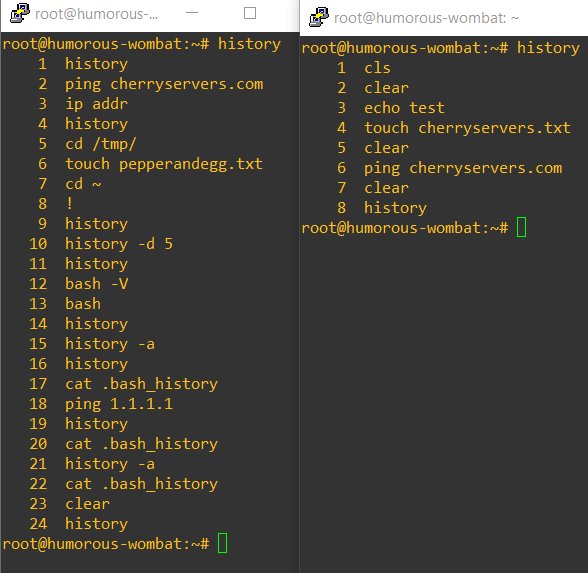 To immediately persist commands to your ~/.bash_history file, you can add this to ~/.bashrc:

Often, knowing when you ran a command is an important part of knowing which command you need now. Adding timestamps to your bash history output can help make this easier.

To include timestamps with your bash history, add this to your ~/.bashrc:

%F adds the date in YYYY-MM-DD format and %T adds a HH:MM:SS timestamp. Here is an example of what history command output looks like with this bash environment variable set.

Note that the space after the %F and %T is useful for formatting the output. Without the spacing, the date, timestamp, and command would all run together.

For example, to set both to 11,000 entries, modify the default values to read:

In addition to the history command, there are several keyboard shortcuts that make working with bash history easy. Here are some of the most useful:

Here's a simple example to demonstrate the logic: 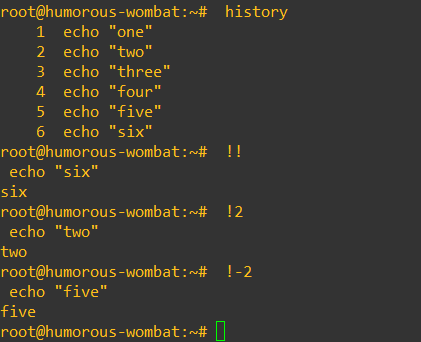 Note that in the example we added a space before our expansion commands so they aren't included in our bash history.

All three of the previous expansion commands are examples of designators. And there are several more powerful designators you can use to work with your bash history.

!<command> will execute the most recent <command> in your bash history. For example, suppose we have these commands in our history output:

You can also use ^designators to substitute parts of the most recent command in your bash history with different content. The general format is:

For example, if the previous command in your history was:

And you wanted to change /path/wrongplace to /path/rightplace instead of typing the entire command again, you could run:

And the output would be similar to:

#Use designators to get arguments from a command

You can use a colon : followed by a specific designator to add arguments from the most recent command in your history to a subsequent command. The table below details some of the common designators:

Below is an example to visualize the concept:

Bash history modifiers complement designators by changing the content or execution of the command. You specify modifiers after a command with a colon and a letter (e.g., :h )

Here are some common bash history modifiers and what they do.

For example, suppose we wanted to list all the .log files in a directory with ls /directory/*.log but instead we ran the command ls /directory/*.txt. We could use the command !:s/txt/log to correct the mistake. End-to-end, it would look similar to this:

With knowledge of bash history, you can work more efficiently at a Linux terminal. The information we covered here should help you handle most of the common bash history use cases you'll encounter. For a deeper dive on bash history, we recommend reading the GNU manpage for the bulitin bash history commands and testing different designators and customizations in your own test environment.

AlmaLinux is an open-source Linux distribution focused on long-term stability, that is a 1:1 binary compatible fork of Red Hat Enterprise Linux (RHEL)