Ansible is a modern application deployment and configuration management tool that is very powerful and simple to use. It makes it easy to handle thousands of remote servers, also known as managed nodes, from a single control node. Ansible allows you to easily reproduce configuration environments and saves you from logging into individual servers and configuring them one by one.

Tracking thousands of remote servers may become a hassle even in Ansible, so it is vital to understand how to group and target your managed nodes by using a special file known as the inventory file.

#What is Ansible Inventory File?

Ansible also gives you the flexibility to create a custom inventory file at your preferred location on your control node to suit your preferences. This is ideal when you have a complex environment and need to segregate your managed nodes into separate inventory files instead of having them all in the hosts file.

In this guide, you are going to install Ansible and set up your custom inventory file on the control node.

To demonstrate how remote servers can be defined within an inventory file, we are going to use the following setup where all servers are deployed with Ubuntu 20.04 operating system:

Ansible control node: This is the server on which Ansible is installed. It is used to your managed nodes via SSH and manage them.

Managed nodes: These are the remote nodes that will be managed from the Ansible control node:

Our small lab setup will be enough to illustrate how you can work with Ansible inventory file to manage your remote systems. However, there is no limit to the number of managed nodes that you can have.

Our very first step will be to install Ansible on the control node. So, login to your control node via SSH or using a free SSH client like PuTTY.

Once logged in, update the system package lists by running the following command. The -y option automatically assumes “yes” as an answer to all command line prompts.

This installs Ansible and a host of other additional packages and dependencies. Upon completion verify that Ansible is installed by checking for its version:

The output below is a proof that we have successfully installed Ansible version 2.9.6.

As mentioned earlier, there is a default inventory file is located at /etc/ansible/hosts. Once you open the file using your preferred command line editor, you will see some basic guidelines about what is expected.

By default, all entries are commented out and no hosts are specified. In the next step, you will connect to the remote hosts and create a custom inventory file.

Ansible is an agentless deployment tool that uses the SSH protocol to communicate with remote nodes. For this to happen seamlessly, we need to go an extra step and configure a passwordless SSH connection between the Ansible control node and the remote systems.

First, generate the SSH key pair with the following command:

It will create an SSH keypair that includes a public and private key which are stored in the .ssh/ folder in your home directory. 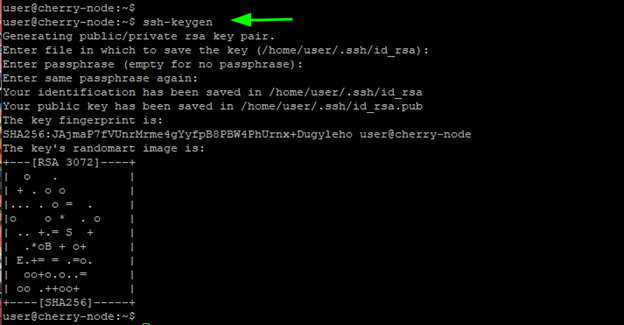 The private key should remain on the Ansible control node and should never be revealed or shared with anyone to avert security breaches such as man-in-the-middle attack. On the other hand, you can comfortably share the public key with any remote system of your choice.

To successfully configure a passwordless SSH connection, you need to copy the public key over to the remote nodes. You can easily do this using the ssh-copy-id command in the syntax shown:

In our case, the command will be:

Key in the remote system’s password when prompted and press the ENTER key to copy the public key to the server.

To verify that we can login to the remote system without password authentication, we will attempt to login via SSH by proving the username followed by ‘@’ then the remote node’s IP address.

The snippet provided below is a confirmation that we just logged in without a password to our remote node1.

The public key is saved in the ~/.ssh/authorized_keys file lon the remote node.

You may double check it is there:

Repeat the same procedure for all your nodes and ensure you can SSH into them without password authentication.

The default inventory file works just fine. In fact, you can put your remote nodes in it using their IP addresses, as shown below:

You can then execute a ping module on the remote nodes without explicitly specifying the remote hosts:

Sure, this works without any glitches, but when faced with multiple managed nodes under different projects, the best practice is to create separate inventory files for each project. This way you will facilitate resource tracking and collaborate with other sysadmins more easily without having everyone tangled up in a single hosts file.

Now, let’s create a custom inventory file. To do this, you should first create a project directory and navigate into it:

Next, create a simple text file. You can give it any arbitrary name:

Then list your managed nodes per line using their IP addresses:

Save the changes and exit the file. Now you can verify your managed hosts using the ansible-inventory command. Note that you must reference the full path to the inventory file when using the -i option.

From here, you can execute a playbook or a ping module on your managed hosts using the custom inventory file:

#Organize Nodes Into Groups and Sub-groups

For a cleaner inventory file and easier management of your managed nodes, it is usually recommended to organize them into groups and subgroups.

A host can belong to one or multiple groups. In the example below, we have grouped our 2 hosts under the webservers group in an INI format.

The inventory file below provides a better illustration of multiple servers grouped into various groups such as webservers, load_balancers and db_servers.

Once again, run the ansible-inventory command and you should see a similar arrangement to what we have here: 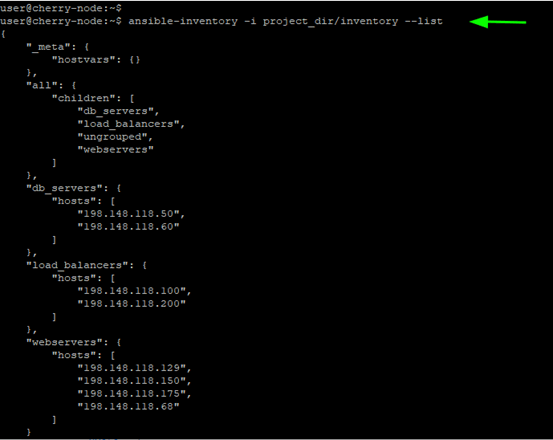 You can also define multiple groups as 'children' groups under a 'parent' group. In this scenario, the 'parent' group becomes the metagroup. Here is an illustration of how you can reorganize the previous inventory using metagroups:

With that in mind, we can reorganize our inventory as demonstrated below.

Once again, you can verify the inventory list as follows: 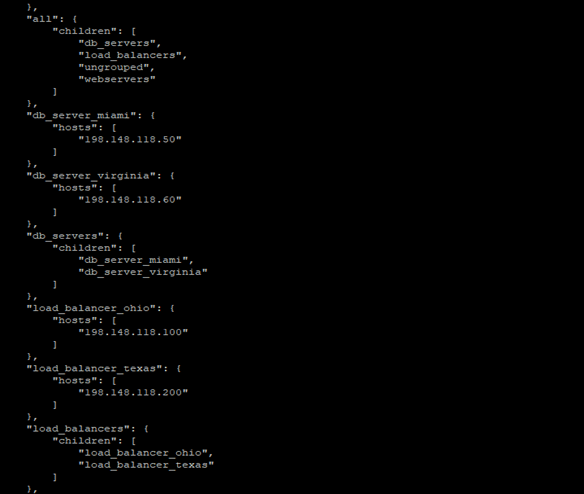 Such an arrangement helps you target smaller server groups with playbooks instead of targeting all nodes at once. For example, you can execute the ping module in the [webservers_miami] child group as follows:

#Use Patterns to Target Execution of Commands

When running playbooks or ad hoc commands with Ansible, you are required to provide a target that is typically defined in the inventory file. Patterns provide flexibility in targeting specific hosts or groups in your inventory file. They support for wildcards, regex expressions and so much more.

To demonstrate how you can use Patterns, consider the inventory file below:

Suppose you want to execute an ad hoc command that targets only the webservers running on production. In this inventory, there are only two webservers matching this criterion: 198.148.118.68 and 198.148.118.129.

Instead of individually targeting the two target hosts, you can simply use the following matching pattern:

The ampersand symbol - & - represents the logical operation AND. This means that the valid hosts MUST be in both groups i.e. webservers and production. Since this is an ad hoc command, we need to insert the \ escape character in the command.

To target hosts that are in the webservers group BUT NOT in production, use the pattern as follows:

Here, the ! symbol represents the logical operator NOT and it indicates that the valid hosts MUST NOT be included in the production group. Once again, we need to include the \ escape character since we are running an ad hoc command that must be interpreted by the shell.

Below is a table that provides additional patterns that you can use when running ad hoc commands and playbooks with Ansible automation tool.

Aliases are a simple way of referencing your managed nodes. Just like nicknames, they help you easily identify your resources without having to recall complicated names when running playbooks.

To define an alias, simply specify an alias name followed by a variable name corresponding to the hostname or IP of the remote host.

Then verify the inventory list to check if the nodes are referenced by aliases. 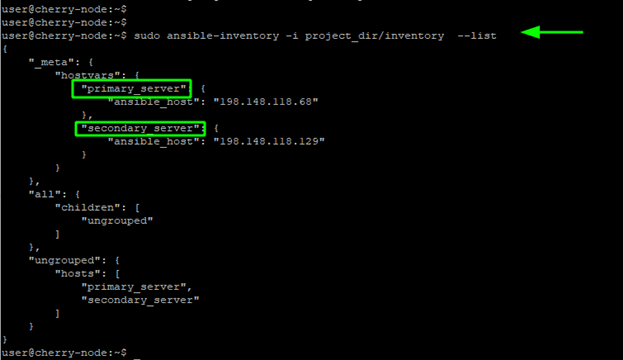 From the output we can see that the servers are now being referenced by their aliases. You can also run an ad-hoc command by referencing the node using the alias:

In Ansible, variables are used to handle differences between managed hosts. Using variables, you can represent variations between systems when executing playbooks or ad hoc commands. For instance, in the previous section we used the ansible_host variable that simply told Ansible where to search for the IP address of a managed node.

In inventory files you can use variables to define hostnames, connection type, ports, etc. In the example below, we have gone a step further to define the user used to initiate the remote connection to the nodes.

In addition, you can also create host groups and have variables at a group level. In this example, we have two separate variable groups - [webservers_a:vars] and [webservers_b:vars] which define the users to connect to the managed nodes.

In this tutorial, we took a deep dive into Ansible inventories and demonstrated how you can organize your managed hosts into groups and subgroups.

Then we went a step further and demonstrated how to use pattern to target certain groups of hosts, touched on aliases, and finally wrapped up with variables that allow certain key parameters vary from host to host.

For more information on how to build your inventory in Ansible, visit the official Ansible documentation.