One of the core components of Ansible is a playbook file. Ansible uses playbook files to define complex tasks that are executed against managed nodes with limited user involvement.

In this guide, you will learn how to create and use Ansible playbook files to execute tasks on managed nodes.

#What is Ansible Playbook?

A playbook is essentially a YAML file that comprises one or multiple plays. A play is a set of ordered tasks to be executed against managed hosts that are specified in the /etc/ansible/hosts file. Each play in a playbook represents a unique task with environment-specific parameters for the target hosts.

Playbooks are quite flexible and can be reused indefinitely with multiple servers to perform the same tasks. Ansible playbooks are often used for server configuration, network device management and application deployment tasks.

Let’s start by making and running our first Ansible playbook. On the control node create a simple YAML file in the /etc/ansible/ directory as follows:

Now populate the playbook file with the following code:

The --- marks the start of the YAML file.

The hosts directive specifies the target hosts on which the playbook will be executed. In this example, the playbook will run on all the hosts specified in the inventory file. To target a specific host, provide the host’s IP address or domain name.

The tasks directive is a list of tasks to be executed on the target host. In this playbook, we have one task which prints a statement to stdout.

The debug keyword is a built-in module that comes with Ansible and prints statements during Playbook runtime. In addition, it comes in handy when debugging statements and variables without halting a playbook. The debug module comes with some options such as msg and var. The msg option specifies the string to the printed to stdout.

To run the playbook, use the ansible-playbook command as shown below:

In our example, you should run the following command:

During playbook execution, you should see the following output:

Notice that two tasks were carried out, even though we defined only one in the Playbook file.

The first task gathers facts about the managed node. Ansible facts refer to host-specific system data that is presented in JSON format such as BIOS information, system date and time, OS type and version and IP address. It also includes hardware data such as the block devices, CPU, RAM, and swap space to name a few.

The second task prints a simple message to stdout as specified in the playbook file. The ok=2 indicates that two tasks were successfully executed.

If you are curious to get a list of all the Ansible facts, execute the following command: 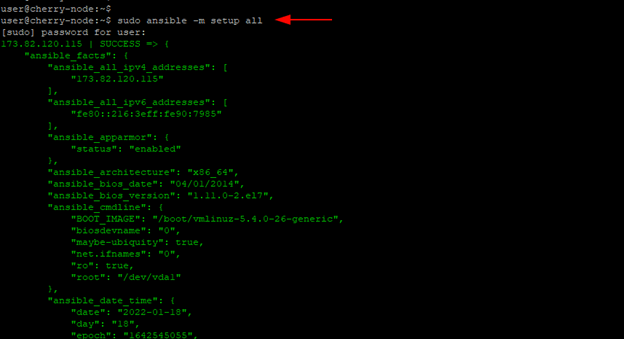 In this section, we will demonstrate how you can accomplish various system administration tasks by incorporating modules in Playbooks.

The following playbook file installs the Apache webserver on the remote target defined under the webserver sub-group in the inventory file. The apt module provides two options: the name option which specifies the name of the package ( apache2 ) and the state option which instructs Ansible to install the latest version of Apache.

Upon running the playbook file, you should get similar output to what we have:

On RHEL 8 and CentOS 8, the same task can be accomplished using the dnf module. Here, the Apache package for RedHat derivatives is defined by httpd.

You can also use modules to start, stop and restart running services on managed nodes. For example, to restart the Apache webserver, we will use the service module in the playbook shown.

Here is the output of the Playbook execution:

Here’s a playbook showing how you can stop the webserver. Note the change of the state parameter from restarted to stop.

From the output of the playbook execution, you can see that the task was successful:

To start the webserver, set the state parameter to started.

Once again, here is the output of the playbook execution:

In the Playbook file below, we are copying the sales_report.txt file from the Ansible control node to the remote server in the /tmp/reports/ directory. In addition, we have assigned the owner and group ownership to the cherry user using the owner and group options. The mode option assigns the octal file permissions 0644 to the file.

The outcome of the Playbook execution is printed as shown:

The playbook runs successfully as shown:

The lineinfile module is a module that is used for performing a wide selection of tasks on a line such as modifying, replacing, or adding a single line to a file. It can be used in conjunction with regex expressions to match specific lines and make changes.

To demonstrate its functionality, let us take a few examples. The playbook modifies the SSH service configuration on the remote target by changing two parameters. The first task sets the ClientAliveInterval directive to
15 while the second task sets the ClientAliveCountMax directive to 4. The regexp option matches the lines that contain the parameters we are trying to modify.

The playbook executes both tasks in order of appearance - from the first to the last:

💡 Pro Tip: In the example above, we are trying to match a line that starts with ClientAliveInterval string. Some lines in Linux configuration files may be commented out (i.e. # ClientActiveInterval). In such case, the regex won’t match, so the lineinfile module will create a new line with the specified string for you.

To add a line to a file, specify the full path of the file, the line to be added to the file, and set the create option to yes.

Here is the Playbook execution:

The Command module takes a command name followed by a list of arguments. The command is executed on target nodes, but the output is not displayed to stdout.

The playbook shown runs the "uptime" and "date" commands on the target modes.

The playbook runs successfully, however, no output from the commands is printed out.

To print the result to stdout, use the shell module. The output of both commands is captured by the register option using our defined uptime_var and date_var variables. These variables are eventually referenced by the msg option, and the values printed to stdout.

In the playbook execution output, you can see the output of both commands printed: 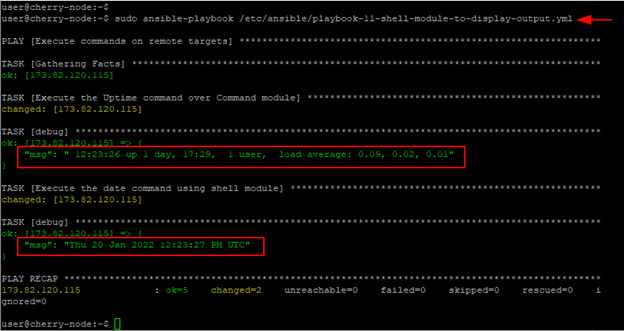 So far, we have demonstrated just a handful of modules. There are hundreds upon hundreds of Ansible modules for performing different tasks. For a more comprehensive list of Ansible modules, visit the Ansible Modules documentation page.

If you are a developer or a programmer, chances are that you have used variables countless times in your code. Like in many programming languages, variables are used in Playbooks to store values. You can assign a value to a variable and reference it anywhere within the playbook.

Variables can also come from external sources, such as variable files, and then be referenced in a Playbook. Special precedence rules apply when working with variables from multiple sources that bear the same name.

To demonstrate how variables are used in practice, let’s create a playbook file that will print out the value of two variables: greetings and topic.

The vars section defines the list of variables that will be referenced by the debug module in the scope of the play. These variables are accessible to all the tasks and files specified within the playbook file.

In the output, the values assigned to the variables have been printed to stdout in the place of the variable names.

Alternatively, you can have a list of variable items. In the playbook below, let’s define a variable called oceans with a list of five values that represent the five oceans.

The playbook iterates through the list of values under the vars section and prints them to stdout using the msg option.

In addition, you can access each of the values in the variable using the index [ x ] attribute in the msg directive where x is the value of the item in the list. The first item is denoted by index[0]. For example, to access the third item on the list, we will modify the referencing as

To better elaborate how conditional statements work, we will have a simple setup with two managed nodes of different OS families:

Consider the Playbook below. The when statement instructs the Playbook to install Nginx webserver on all the servers that belong to the Debian OS family. We are using the ansible_os_family variable here that belongs to the Ansible facts object, so you don’t need to define it in your playbook.

From the output of the playbook execution, we can see that the CentOS host has been excluded since it does not satisfy our condition.

#Using ‘AND’ Operator with ‘when’ Statement

When using the and operator, both conditions MUST be satisfied. In this example, the playbook will run the task successfully if the managed nodes belong to the Debian Linux family and whose release number is 20.04.

Since the Ubuntu node matches the criteria, the playbook will successfully run and install Nginx on it but skip the CentOS 8 server.

#Using ‘OR’ Operator with ‘when’ Statement

With or operator a task will be executed if either condition is met. In the following Playbook, a new directory called data is created in the home directories of managed nodes that belong to either Debian or RedHat Linux families.

Predictably, the directory is created on both managed nodes since both belong to either of the two OS families.

And just to confirm this, we will list the contents of the home directories on both nodes.

Occasionally, you will find yourself performing repetitive tasks that require you to write multiple tasks performing the same operation. Take, for example, a playbook that creates new users on a target system as shown.

Evidently, there is a lot of duplication here. It can be daunting and time consuming when dealing with multiple tasks of a similar nature. This is where loops come in handy.

Loops provide a simplified way of executing repetitive tasks with fewer lines of code. They iterate through a list of values specified using the loop or with_* directives.

The loop directive lists the values which are referenced by a variable called item enclosed in double curly braces. During runtime, the playbook iterates through the list of users defined by the loop directive. Each of the users is then passed to the item variable and all the users are created in a simple, yet efficient manner. It’s apparent that the playbook looks neater with fewer lines of code achieving the same goal.

Here is the output of the Playbook execution to confirm the creation of the users:

In this guide, you have learned how to create and run Ansible playbooks. You have delved into various Playbook elements such as modules, variables, conditional statements, and loops.

Still, we have barely scratched the surface and there’s a lot you can achieve with Playbooks. For more information about Ansible Playbooks, check out the official Ansible Documentation portal.