A Central Processing Unit (CPU) is the brains of your computer. The main job of the CPU is to carry out a diverse set of instructions through the fetch-decode-execute cycle to manage all parts of your computer and run all kinds of computer programs.

A presentation about a modern CPU manufacturing by Intel

A CPU is very fast at processing your data in sequence, as it has few heavyweight cores with high clock speed. It’s like a Swiss army knife that can handle diverse tasks pretty well. The CPU is latency-optimized and can switch between a number of tasks real quick, which may create an impression of parallelism. Nevertheless, fundamentally it is designed to run one task at a time.

A Graphics Processing Unit (GPU) is a specialized processor whose job is to rapidly manipulate memory and accelerate the computer for a number of specific tasks that require a high degree of parallelism.

GPU vs. CPU demo by Adam Savage and Jamie Hyneman from Nvidia

As the GPU uses thousands of lightweight cores whose instruction sets are optimized for dimensional matrix arithmetic and floating point calculations, it is extremely fast with linear algebra and similar tasks that require a high degree of parallelism.

As a rule of thumb, if your algorithm accepts vectorized data, the job is probably well-suited for GPU computing.

Architecturally, GPU’s internal memory has a wide interface with a point-to-point connection which accelerates memory throughput and increases the amount of data the GPU can work with in a given moment. It is designed to rapidly manipulate huge chunks of data all at once. 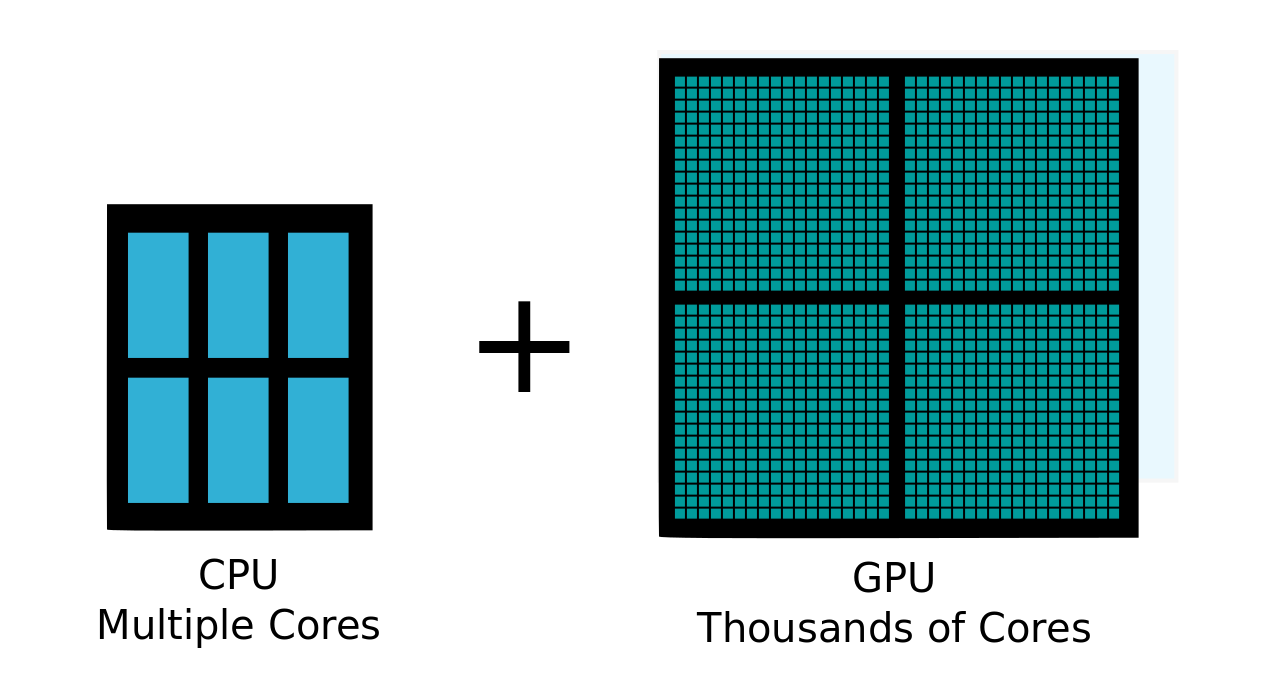 The topic of CPU and GPU limitations boils down to the exact use case scenario. In some cases, a CPU will be sufficient, while other applications may benefit from a GPU accelerator.

Let’s now uncover some general weak spots of CPU and GPU processors to help you decide on whether you need both of them or not.

A tendency to embed increasingly complex instructions into CPU hardware directly is a modern trend that has its downside.

In order to execute some of the more difficult instructions, a CPU will sometimes need to spin through hundreds of clock cycles. Although Intel uses instruction pipelines with instruction-level parallelism to mitigate this limitation, it is becoming an overhead to overall CPU performance.

Context switch latency is time needed for a CPU core to switch between threads. Switching between tasks is quite slow, because your CPU has to store registers and state variables, flush cache memory and do other types of clean up activities.

The notion that the number of transistors per square inch on an integrated circuit doubles every two years may be coming to an end. There is a limit to how many transistors you can fit on a piece of silicon, and you just cannot outsmart Physics.

Rather, engineers have been trying to increase computing efficiency with the help of distributed computing, as well experimenting with quantum computers and even trying to find a silicon replacement for CPU manufacturing.

Although GPUs have many more cores, they are less powerful than their CPU counterparts in terms of clock speed. GPU cores also have less diverse, but more specialized instruction sets. This is not necessarily a bad thing, since GPUs are very efficient for a small set of specific tasks.

GPUs are also limited by the maximum amount of memory they can have. Although GPU processors can move a greater amount of information in a given moment than CPUs, GPU memory access has much higher latency.

The most popular GPU APIs are OpenCL and CUDA. Unfortunately, they are both renowned for being hard to debug.

Although OpenCL is open source, it is quite slow on Nvidia hardware. CUDA, on the other hand, is a proprietary Nvidia API and is optimized for Nvidia GPUs, but it also automatically locks you in their hardware ecosystem.

#Do you need a GPU accelerator?

There’s always a bottleneck somewhere in your system. The question whether or not you need a GPU accelerator is always related to the specifics of the problem you are trying to solve.

Both CPU and GPU have different areas of excellence, and knowing their limitations will leave you better off when it comes to choosing optimal hardware for your project.

Here at Cherry Servers we provide dedicated GPU Servers with modern Intel or AMD hardware and high-end Nvidia GPU accelerators. If you are wondering, what would be an ideal server for your specific use case, our technical engineers are eager to consult you 24/7 via Live Chat.

What Is GPU Computing And How Is It Applied Today?

GPU computing is the use of a graphics processing unit to perform highly parallel independent calculations that were once handled by the CPU.